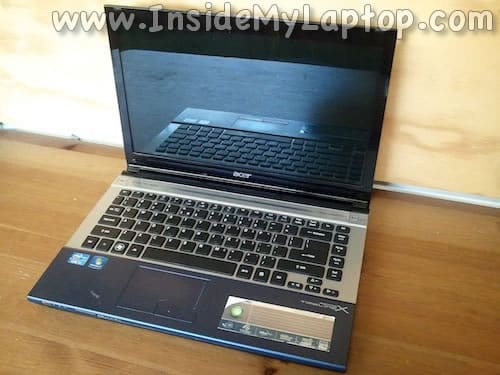 In this guide I’ll be taking apart an Acer Aspire 4830T in order to access and replace the cooling fan.

In my case it started making lots of noise.

In this model there is no easy access to the fan, it’s mounted inside the case, under the keyboard.

Before you start, make sure the laptop is turned off.

Remove one screw securing the service cover on the bottom. 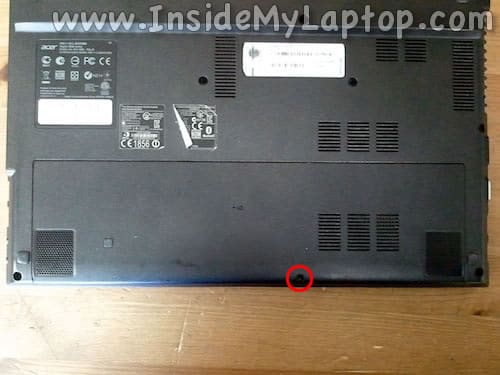 When the service cover removed, you can get access to the hard drive and both RAM modules. 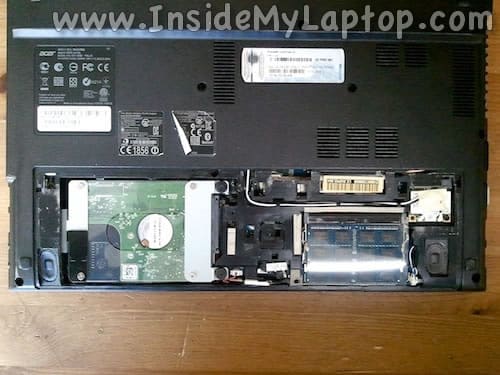 It’s not necessary to remove the hard drive for the purpose of my disassembly. I just show how it’s done in case you need it. 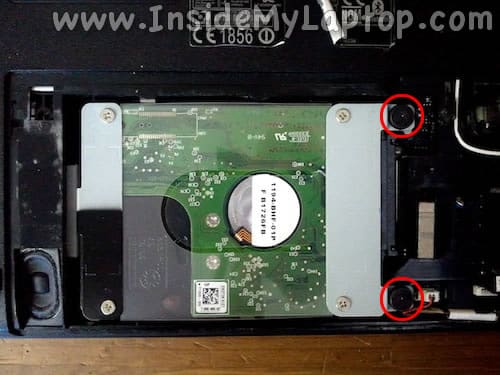 Lift up the right side of the hard drive and disconnect the cable. 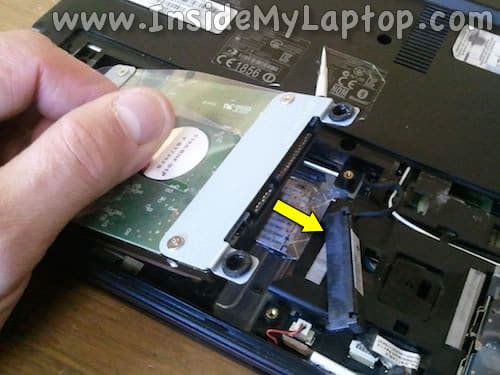 By the way, in Acer Aspire 4830T the CMOS battery buried deep inside the laptop.

You can see the battery through the opening in the case. 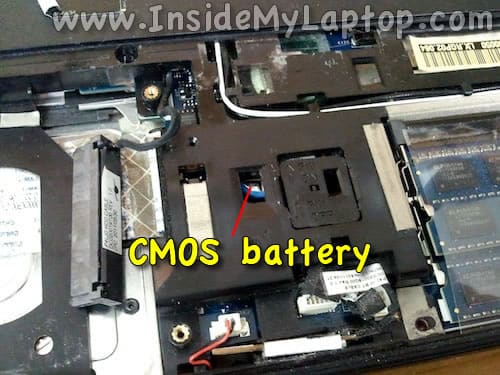 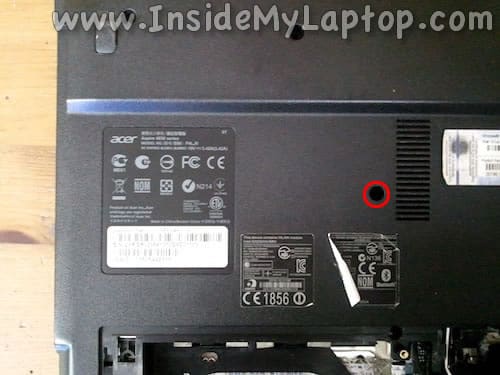 Insert a small flat head screwdriver between the optical drive and bottom case. 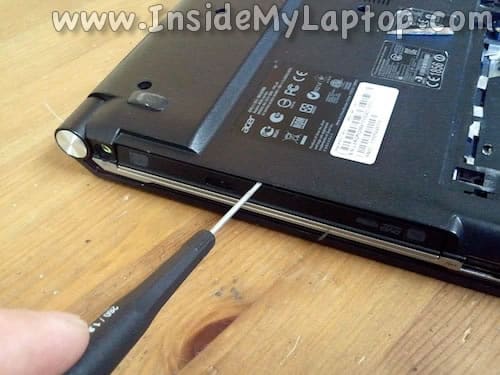 Carefully pull the drive out of the case. Note: it’s not necessary to remove the optical drive for the purpose of my disassembly. I just show how it’s done. 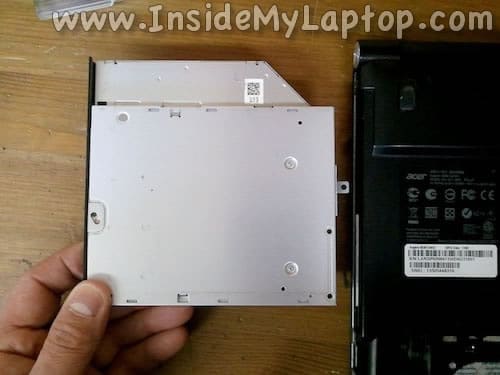 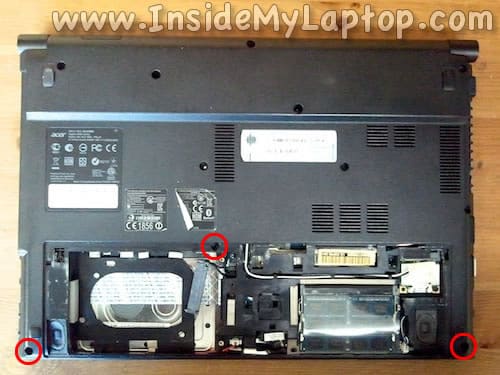 Lift up the palm rest assembly as it shown on the following picture and carefully turn upside down. 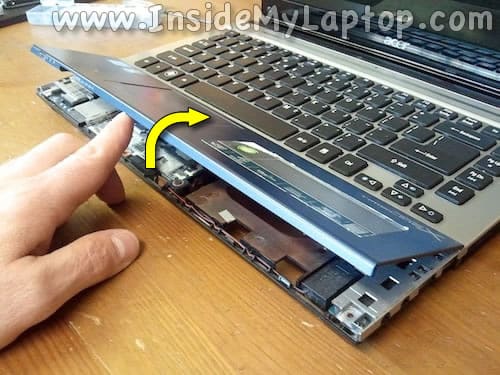 Before you can remove the palm rest completely, it’s necessary to unlock and release the track pad cable. 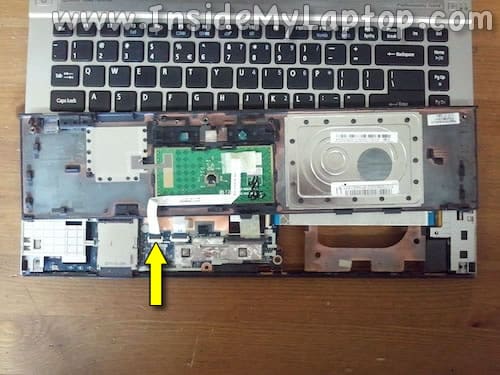 Here’s how to unlock the connector.

Lift up right side of the cable retainer (brown piece) with the fingernail. 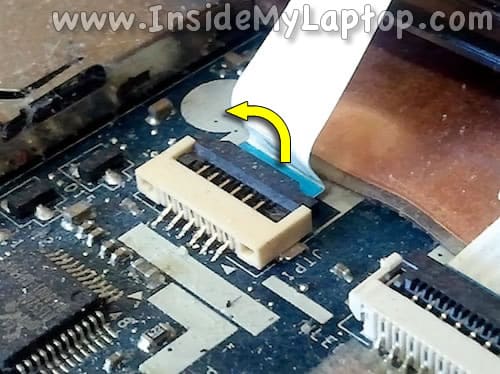 Now you can pull the cable out of the connector and remove the palm rest. 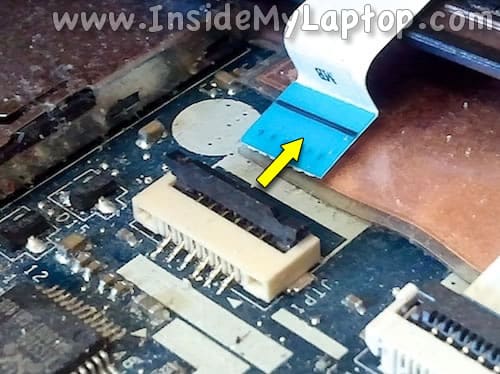 Remove screws from the bottom of the laptop. 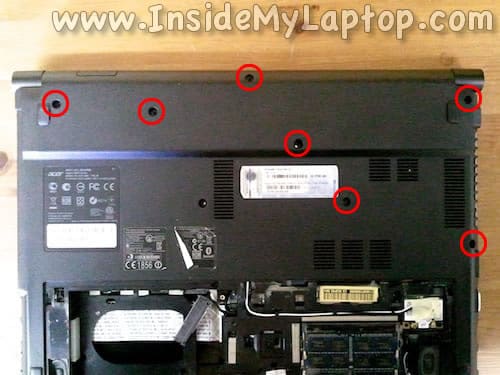 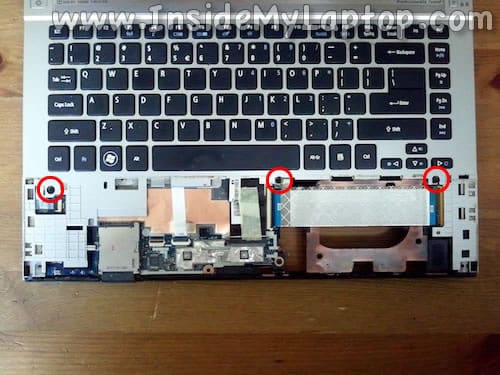 The left connector can be unlocked the same way as we did in steps 12 and 13. 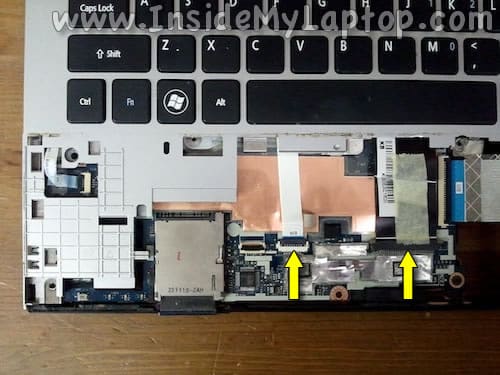 Here’s how to unlocked the right connector.

Slide the cable retainer about 2-3 millimeters to the shown direction.

The retainer must remain connected to the connector base. 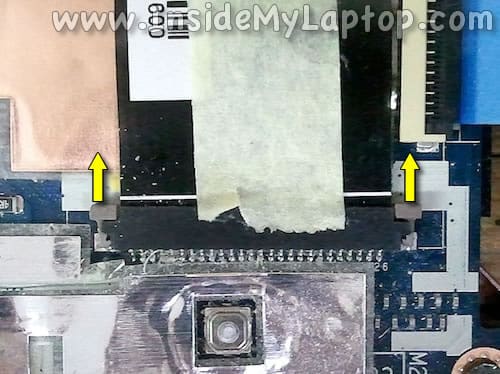 Now remove tape securing the connection and pull the cable from the connector. 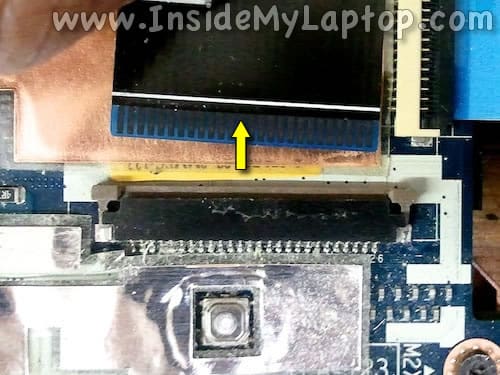 Lift up the keyboard assembly. 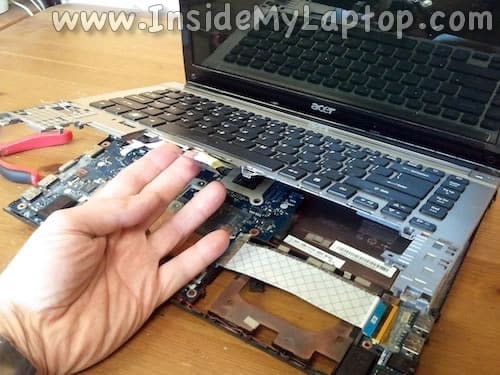 and remove it from the laptop. 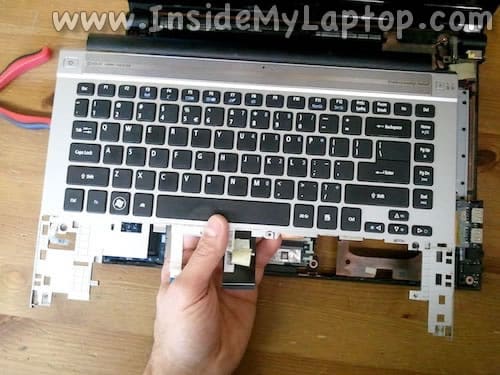 If you need to replace the keyboard, it will be necessary to remove the mylar cover and screws securing the keyboard.

I do not show this procedure in this guide but it shouldn’t be very difficult. 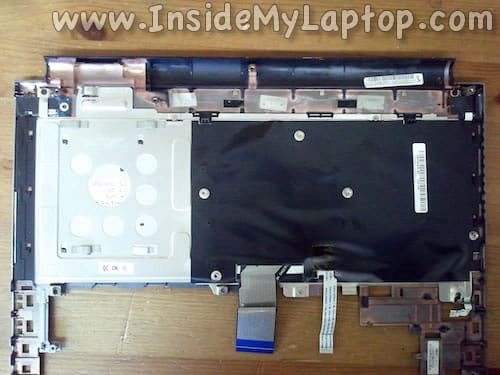 Now you can get access to the cooling fan. 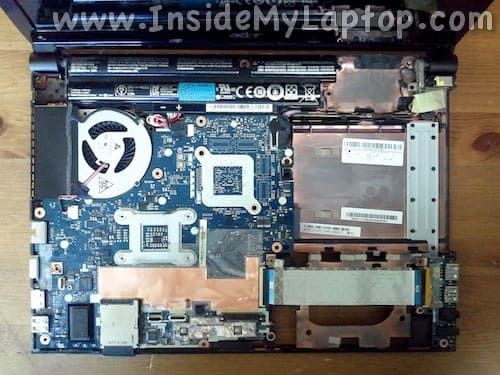 Remove the mylar cover between the fan and heatsink. 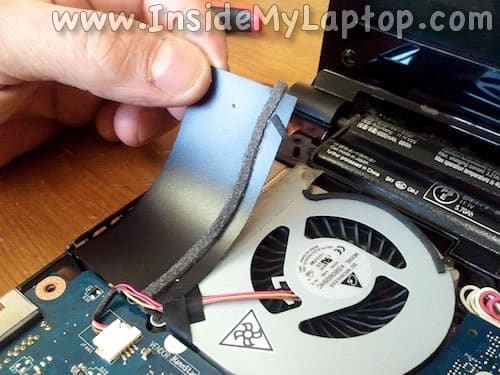 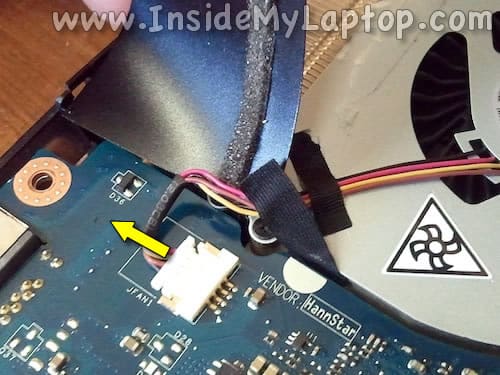 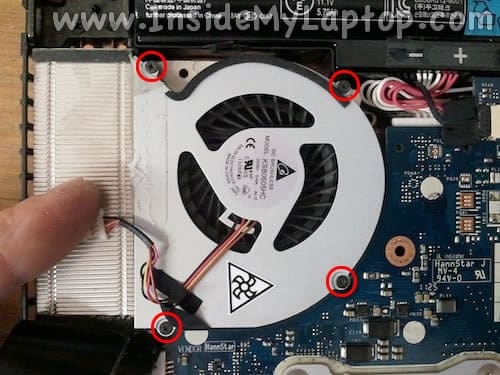 Now you can replace the failed fan with a new one. 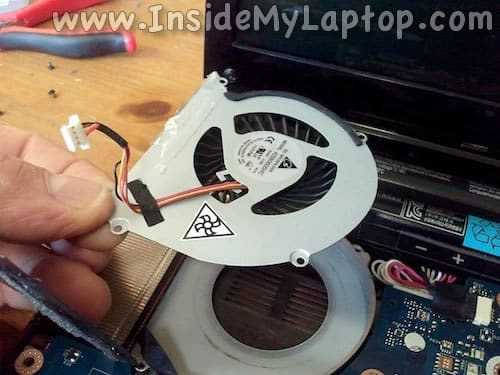 Instead of replacing, you can try lubricating the fan first.

Separate the vent from the motor. 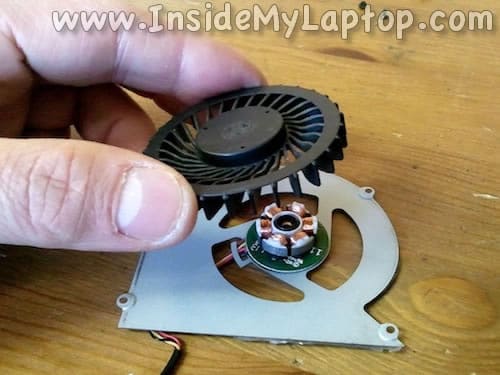 Apply a drop of multi-purpose oil on the fan pin and inside the motor, right in the middle.

Assemble everything back together and test the laptop.

It’s possible that lubricating the fan will fix the noise problem. If not, you’ll have to replace the fan. 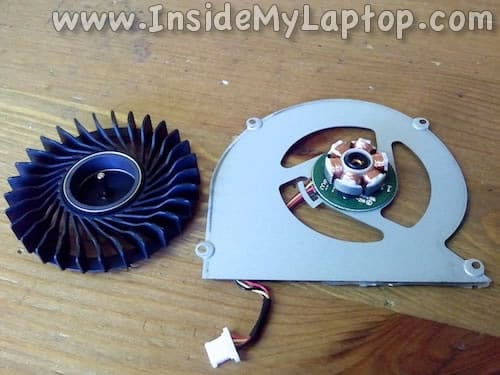 In the next guide I explain how to replace Acer Aspire 4830T screen.