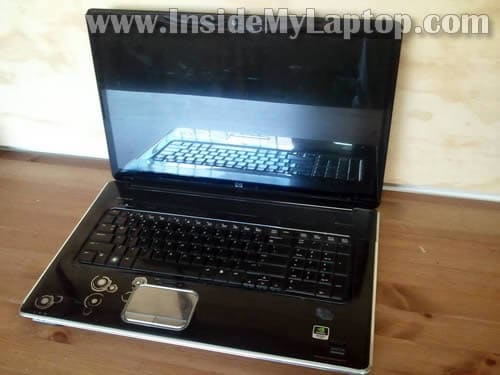 In this guide I explain how to take apart a HP Pavilion dv8 laptop. I’m taking it apart in order to replace failed DC jack.

The LED light on the DC jack started flickering when adapter plug moved. I tested it with another known good AC adapter but it didn’t fix the problem. I assumed this is DC jack related failure and decided to replace it.

I believe that HP Pavilion dv8  have many different flavors.

It’s possible that your model will be a little bit different but most disassembly steps should be very similar. 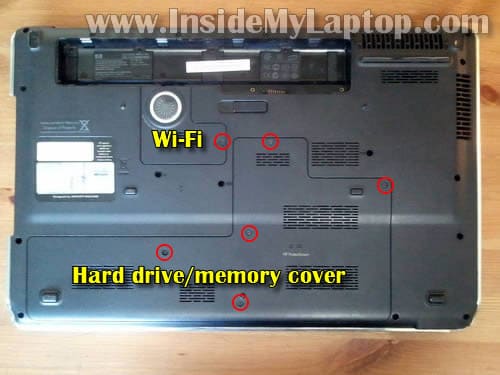 My HP pavilion dv8 had two hard drives installed. By the way, they are regular 2.5″ SATA HDDs.

Disconnect the hard drive cable from the motherboard. Lift up and remove the whole HDD assembly. 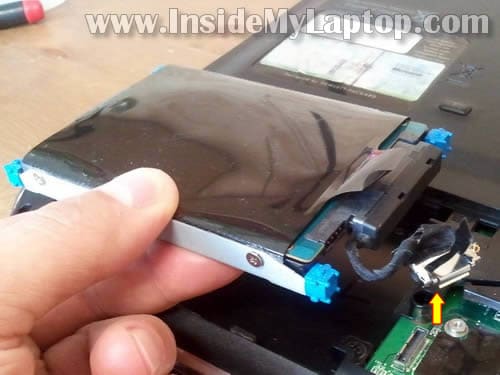 Also, you can see the CMOS battery. 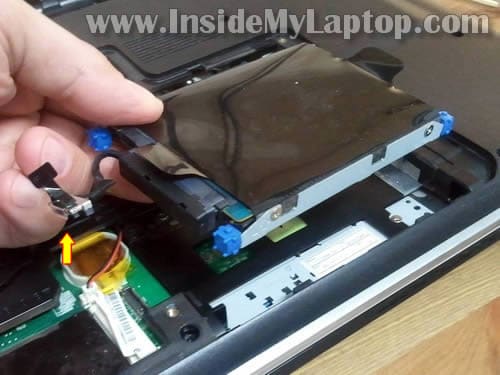 HP Pavilion dv8 has two memory slots and both slots accessible though the door we removed in the step 1. 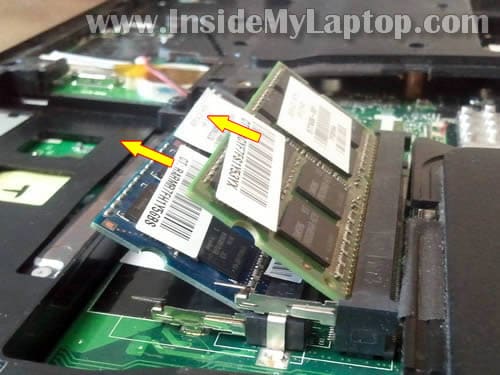 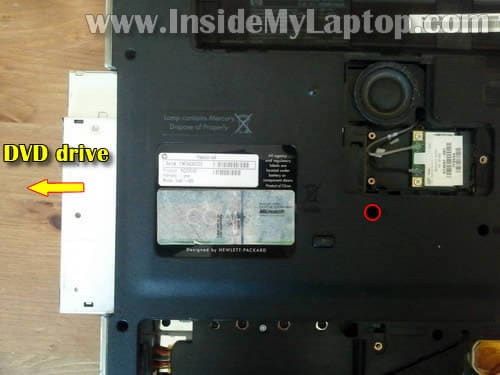 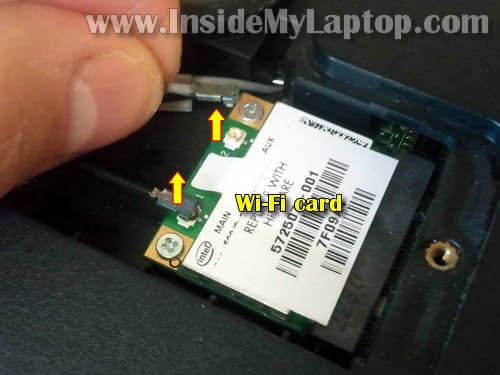 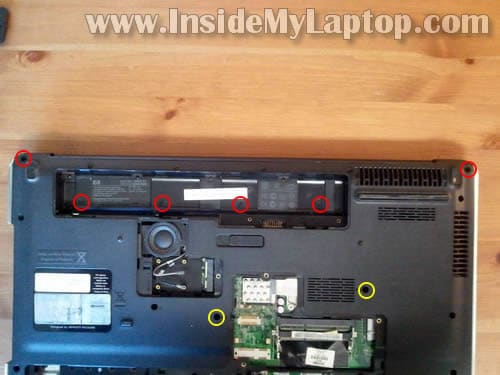 Remove the cover with your fingers. 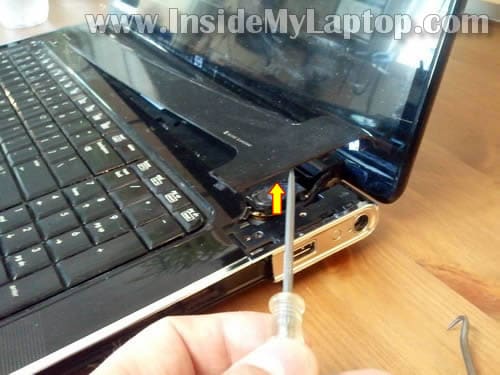 Carefully lift up one side of the keyboard bezel. 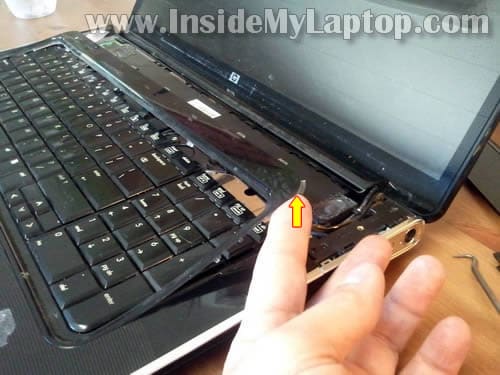 Continue separating the keyboard bezel from the base.

Be careful, the bezel has LED board built in. There is a cable connecting the LED board to the motherboard.

Turn the keyboard bezel upside down so you can access the LED board connector underneath. 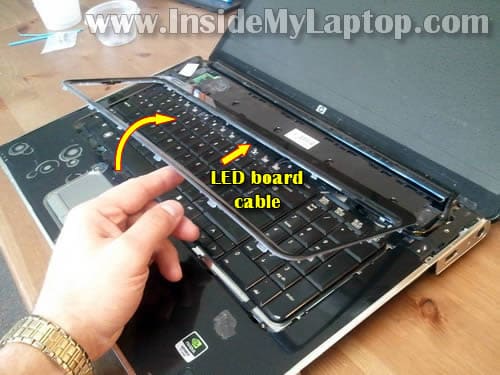 Here’s how you unlock the LED board cable connector.

Move the brown tab about 2 millimeters to the direction shown by two yellow arrows. DO NOT move it any further.

The brown tab must stay attached to the connector base. 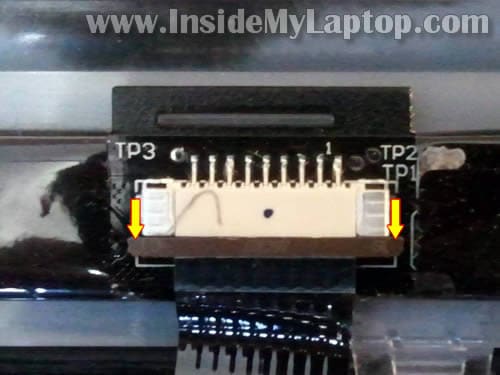 Now you can pull the LED board cable from the connector. 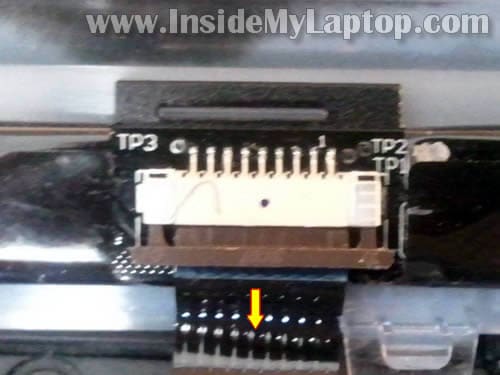 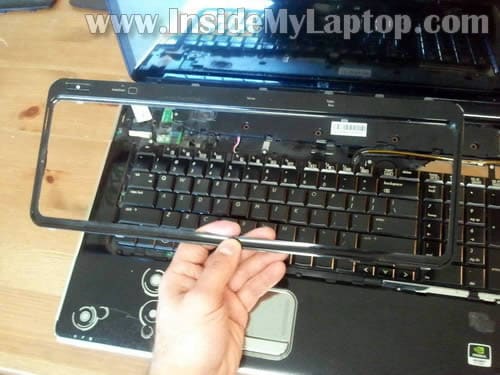 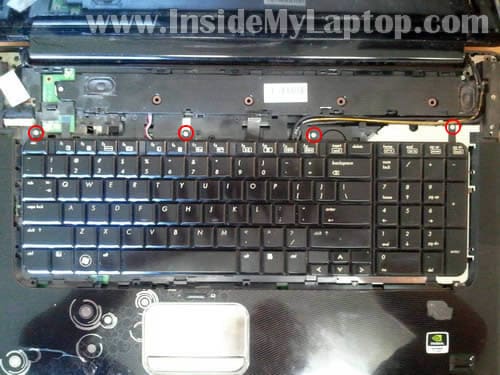 Lift up the keyboard and move it towards the LCD screen.

Now you can access the keyboard cable connector underneath.

Before you remove the keyboard, it’s necessary to unlock the connector and release the cable. 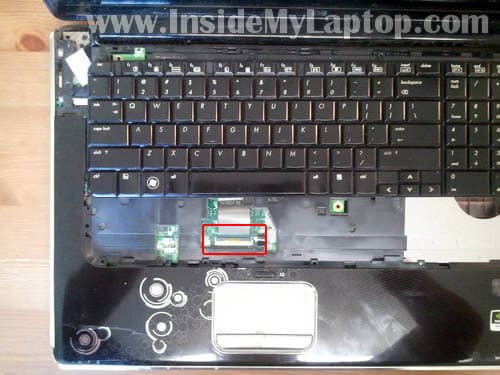 In order to unlock the keyboard cable connector lift up the outer side of the brown tab at a 90 degree angle. 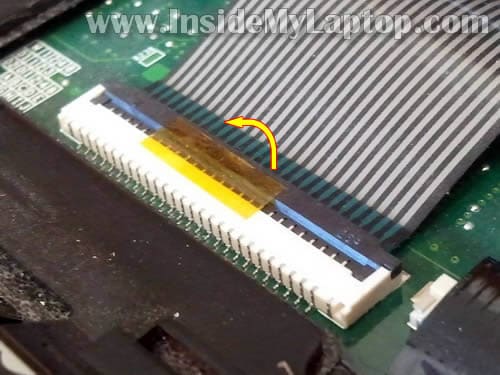 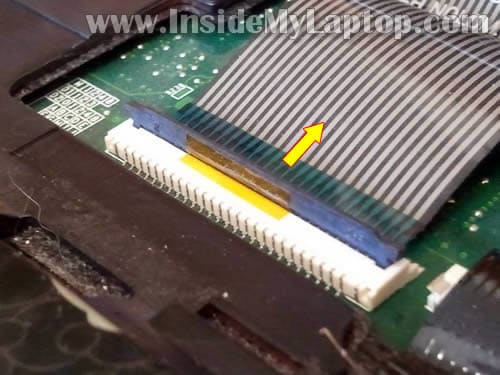 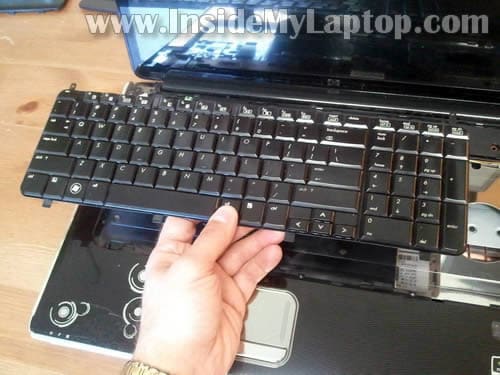 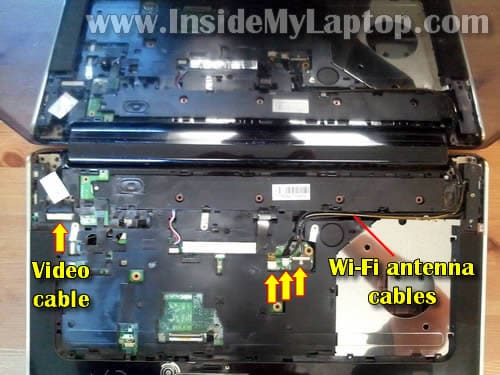 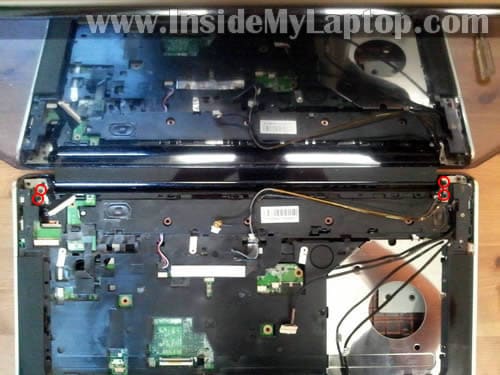 Lift up and remove the display panel assembly. 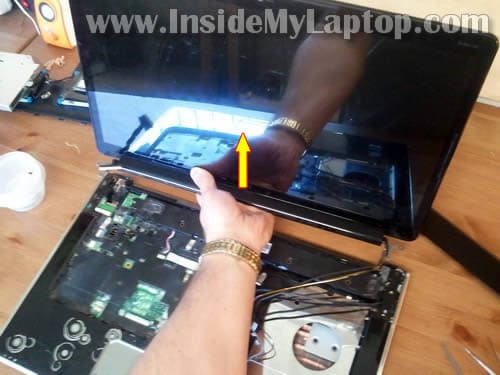 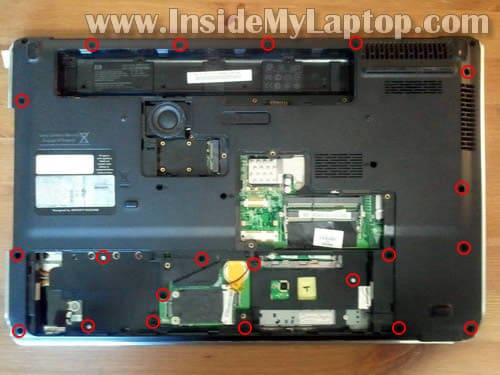 Disconnect all cables I pointed with yellow arrows (from left to right): 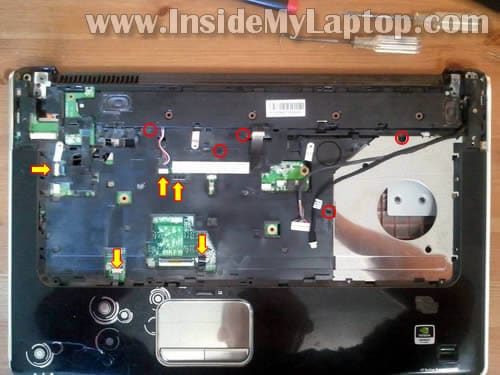 When you lift up the top cover don’t forget to disconnect the finger print device cable (pointed with yellow arrow). 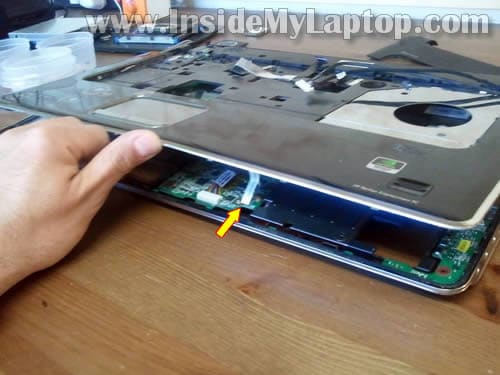 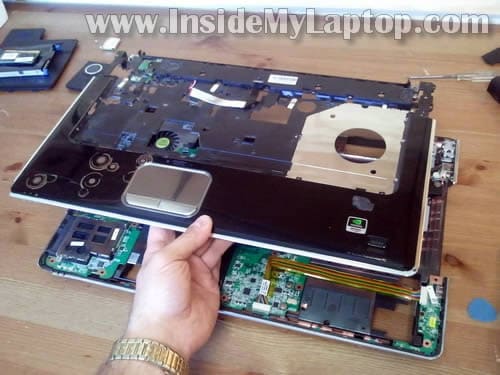 As you know, my goal is replacing the DC jack which is located in the upper right corner. 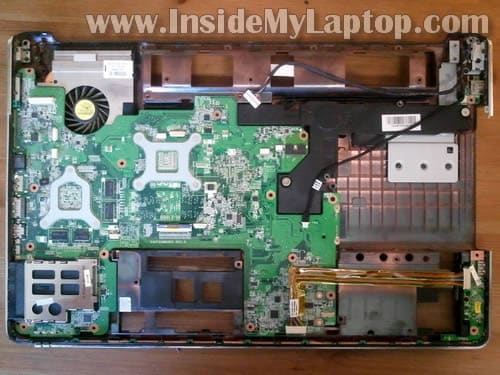 Remove one screw securing the metal bracket to the bottom case.

Lift up and remove the bracket. 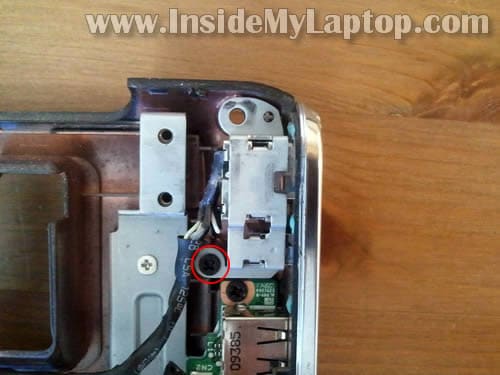 Finally, lift up the DC jack.

As you see, in HP Pavilion dv8 laptop the DC jack is not soldered to the motherboard. It’s attached to the harness.

We unplugged the DC jack harness from the motherboard earlier, in the step 19.

Now you can remove the failed DC jack and replace it with a new one.

Instead of buying just the DC jack itself, I would recommend buying the whole harness (jack and cable). In this case you don’t have to solder anything. 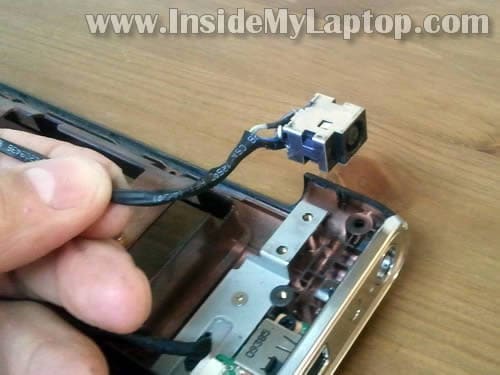 I’m not going to disassemble this laptop any further but it shouldn’t be difficult.

In order to remove the motherboard you’ll have to remove two screws and disconnect one cable (maybe more cables if you have a different Pavilion dv8 model).

The cooling fan can be accessed and replaced only after the motherboard is removed. 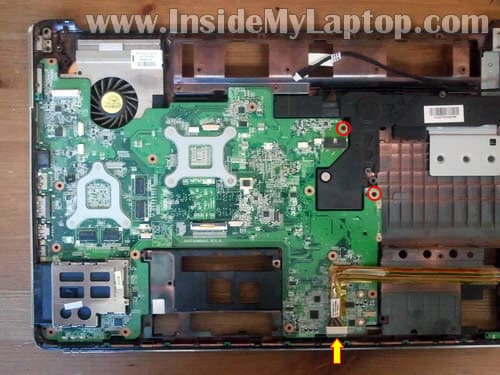