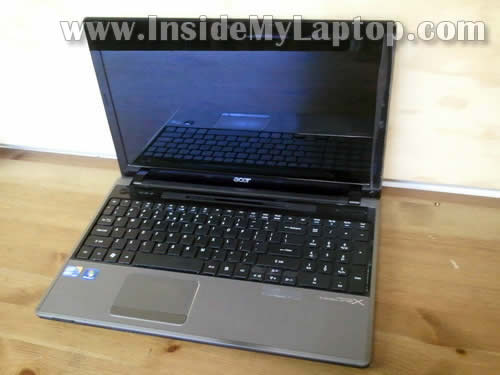 In this post I explain how to take apart an Acer Aspire 5820T series laptop.

I will take it apart down to the motherboard.

If you would like to replace the LCD screen, you should check this LCD replacement guide. It should be very similar.

Make sure the computer is turned off before you start disassembly. 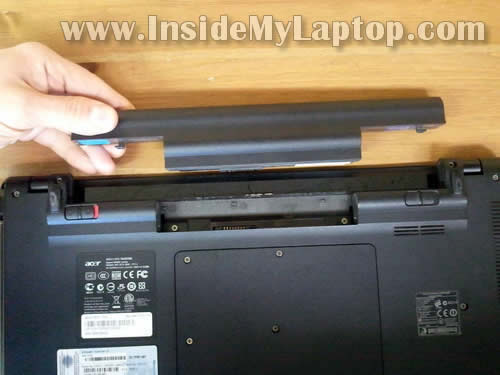 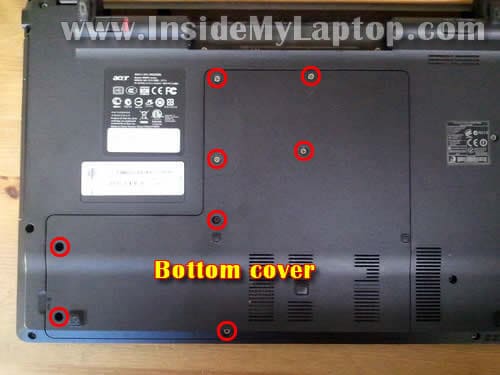 Under the bottom cover you can access the following laptop components:
– both memory modules.
– CMOS battery.
– hard drive.
– wireless card.

Acer Aspire 5820T can take up to 8GB RAM maximum. You can install up to 4GB RAM module into each slot. 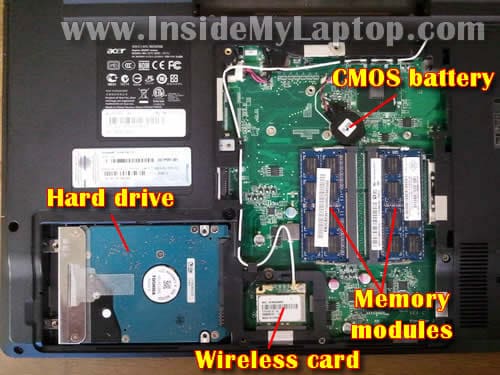 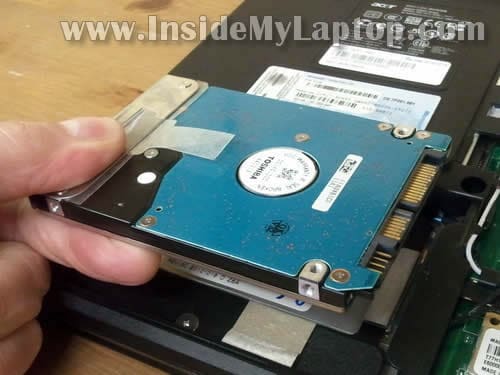 Slide the DVD drive to the left to disconnect it from the motherboard.

NOTE: the DVD drive was secured by one of the screws we removed in the step 2. 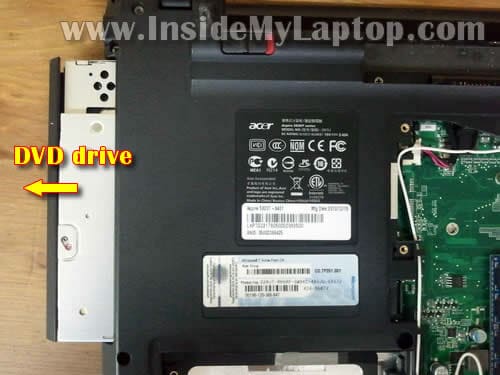 You’ll find six spring loaded locks on the upper side of the keyboard.

In order to remove the keyboard you’ll have to push all locks into the case and lift up the keyboard. 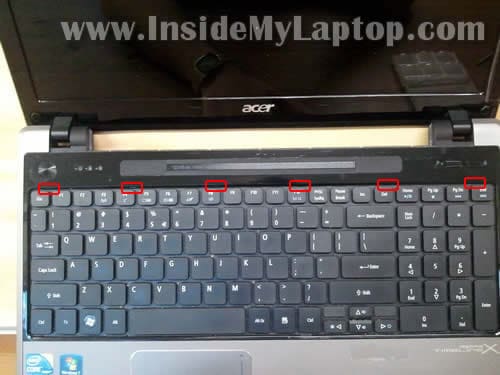 Here’s how you do it.

Push one lock into the case with a small flathead screwdriver. At the same time lift up the keyboard a little bit.

When the keyboard lifted up it will not allow the lock to slide back into the locking position.

Do the same with all remaining locks. 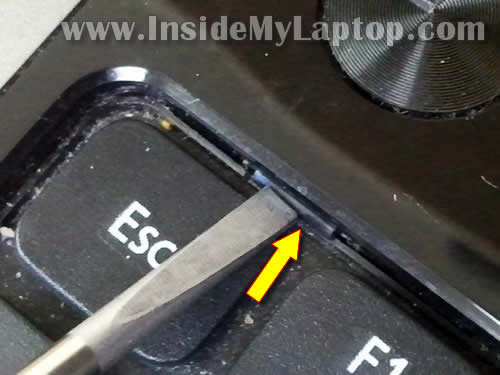 Lift up the upper side of the keyboard and remove it from the laptop base. 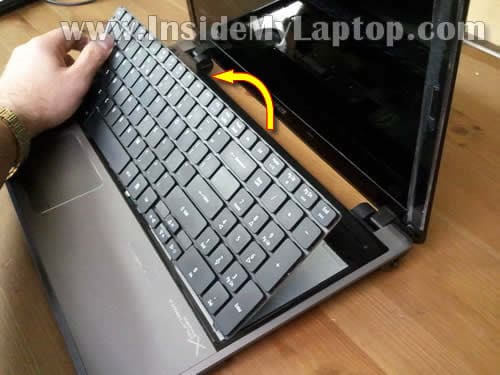 It’s necessary to unlock the connector and release the cable before removing the keyboard. 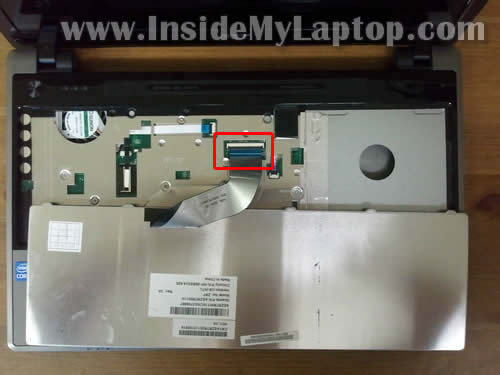 Lift up the brown locking tab with your fingernail.

It will open up at a 90 degree angle. 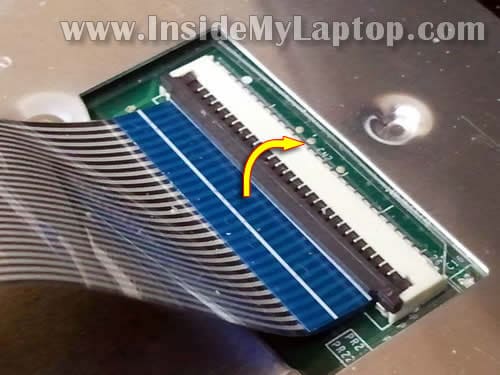 On this picture the same connector shown in the unlocked position.

Pull keyboard cable from the connector. 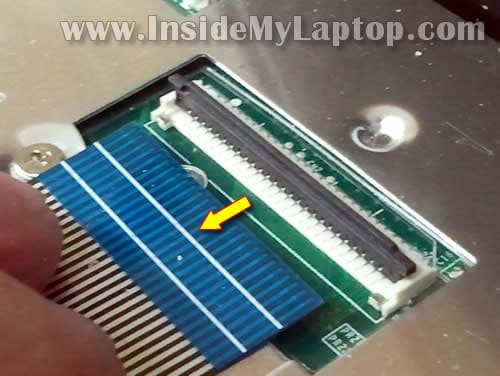 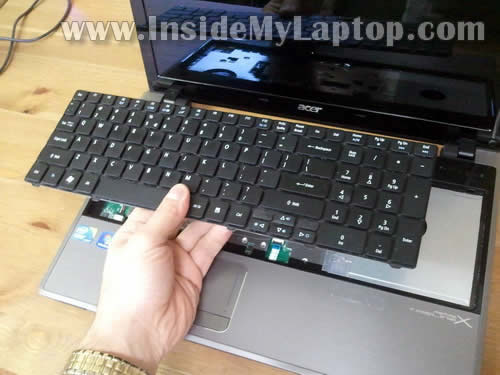 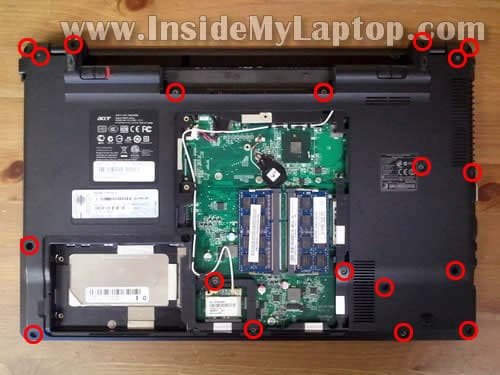 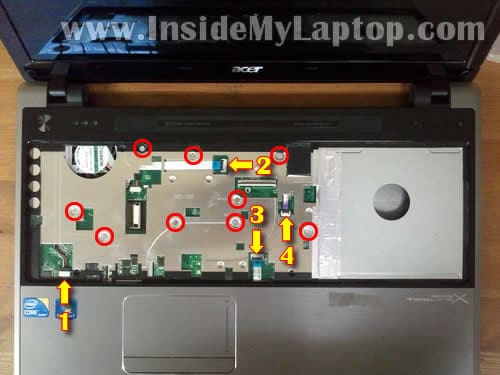 It’s a regular male-female type of connector. Simply unplug the male part from the female part.

Do not pull by the wires. Disconnect it by the edges of the connector. 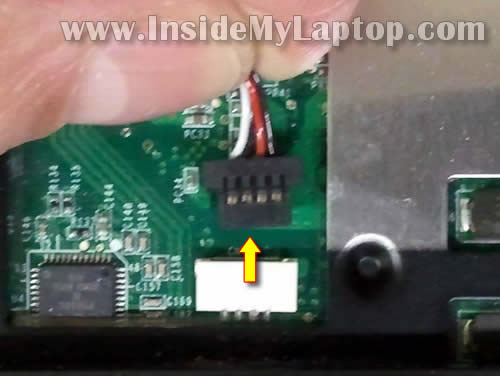 Disconnect three other cables the same way you disconnected the keyboard cables in steps 10-11.

Unlock the connector first by lifting up one side of the locking tab. 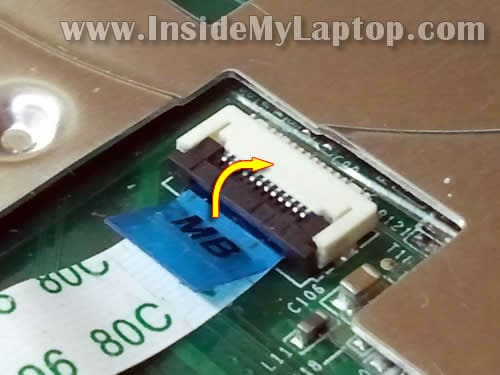 Pull the cable from the connector. 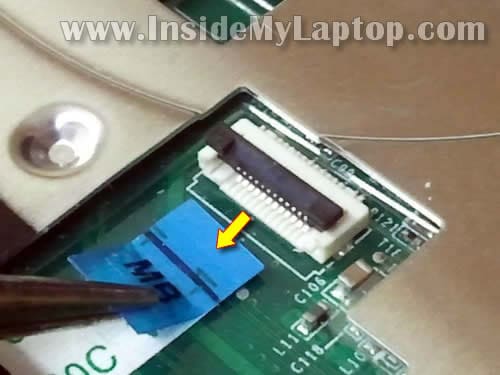 Stat separating the top cover assembly from the base cover. 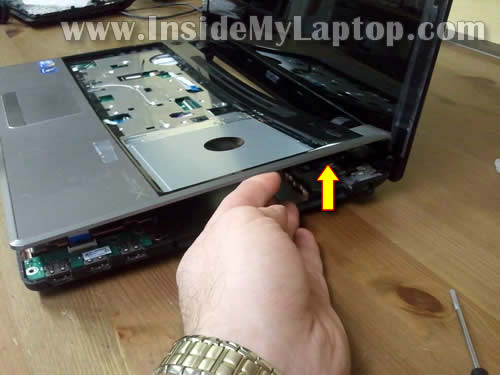 If the top cover doesn’t separate, use a piece of plastic (I’m using a guitar pick).

Insert it between the top cover and bottom cover and slowly move along the side. 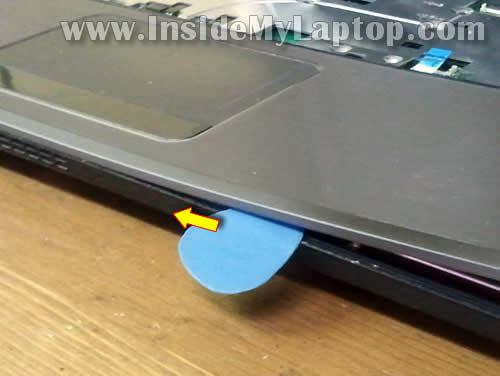 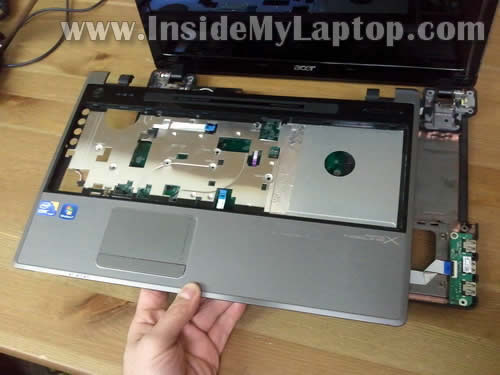 On the other side of the top cover assembly you can access the following laptop components:
– Switch board.
– Both speakers.
– Power button board.
– Touchpad. 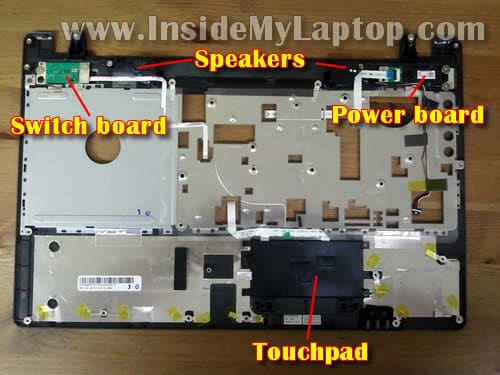 I’ll be removing the motherboard so it’s necessary to disconnect both antenna cables from the wireless card. 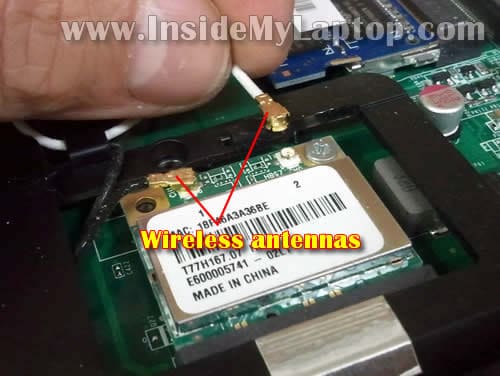 Also, unplug the DC jack connector from the motherboard.

This connector located under the bottom cover which we removed in the step  2. 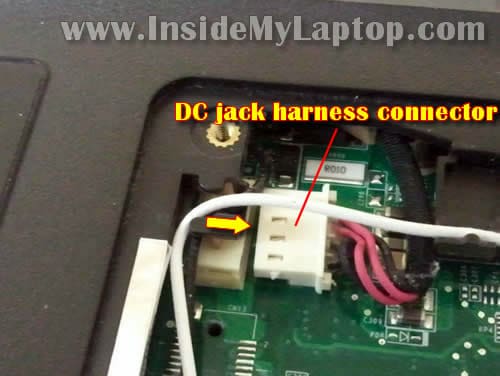 Remove one screw securing the motherboard. 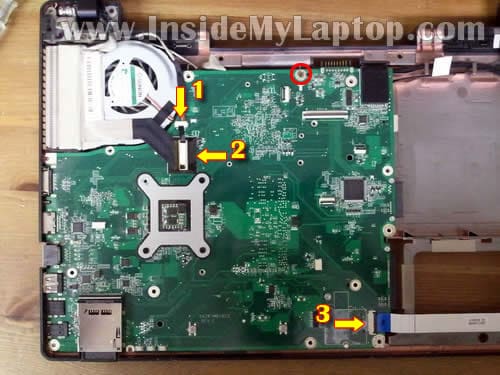 Here’s how you unplug the video cable connector.

Just lift it up by the black belt attached to the connector. 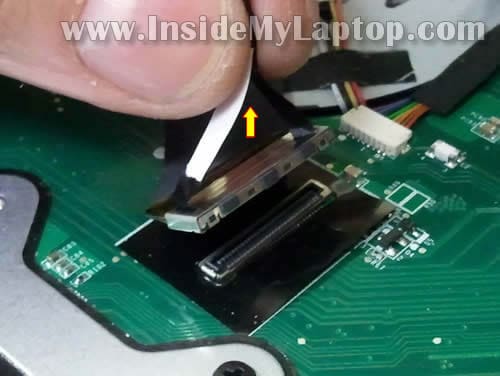 Start removing the motherboard from the base as it shown on the following picture. 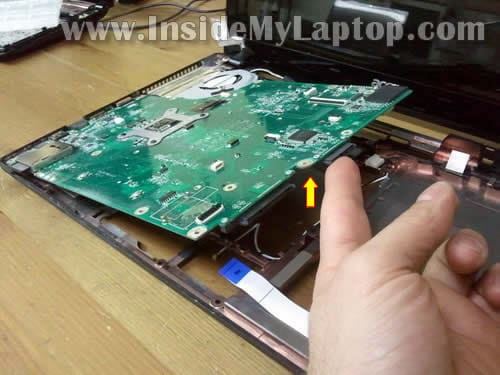 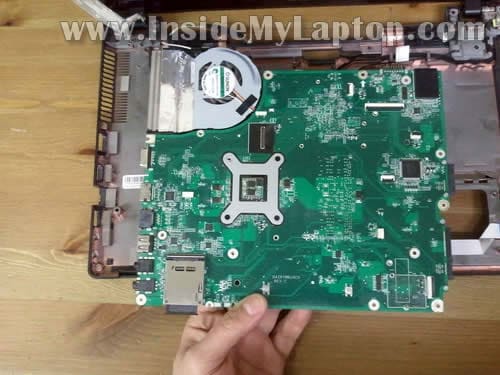 On the other side of the motherboard you’ll get access to the cooling fan and CMOS battery.

By the way, in Acer Aspire 5820T the CMOS battery IS NOT soldered to the motherboard. It can be unplugged and replaced. 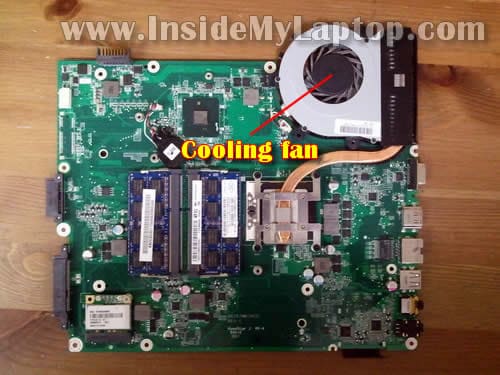 The DC jack harness is running under the right hinge mounting bracket.

There shouldn’t be a problem to remove the DC jack harness and replace it with a new one if need. 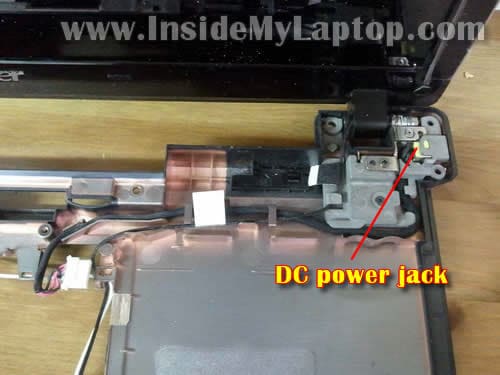