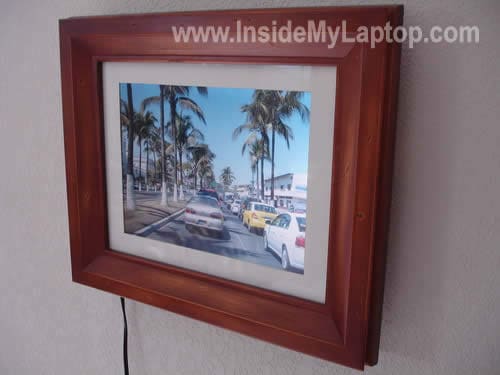 I have made this digital picture-photo frame from an old Toshiba Satellite laptop. This project took me half a day but the result was very rewarding. My new 14″ digital photo frame works just great and I have tons of space for all my pictures. 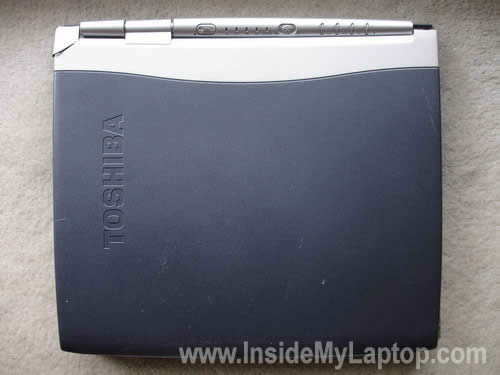 My laptop was in a good working condition but the LCD cover was cracked and the laptop wasn’t powerful enough to handle some applications. Instead of selling it for $80-90 I decided to convert this old lappy into something useful. 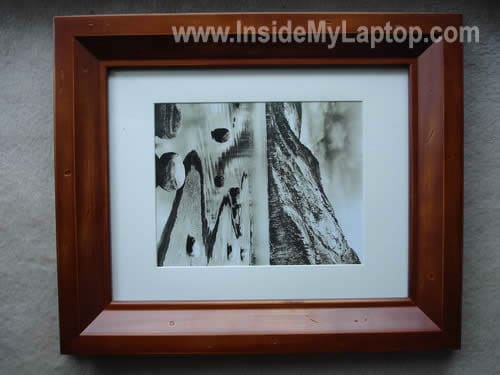 First of all, I had to find a frame witch is big enough for my project. I found a really good wooden frame in a local Fred Meyer store for $20. 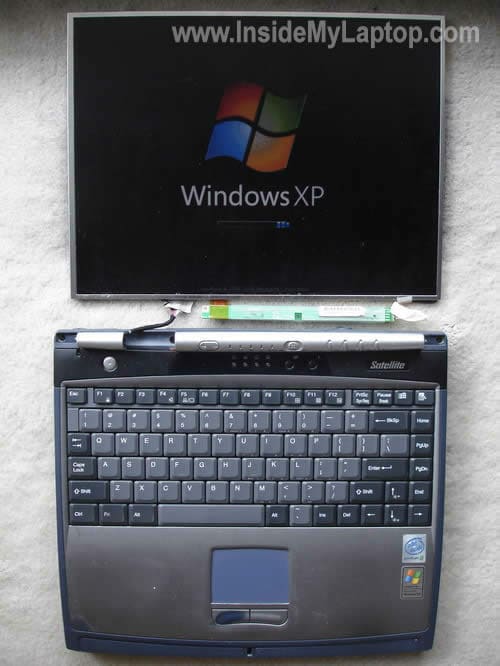 The display panel had been disassembled. I removed front bezel, LCD cover and hinges.
For this project you’ll need a laptop with a long flexible video cable. 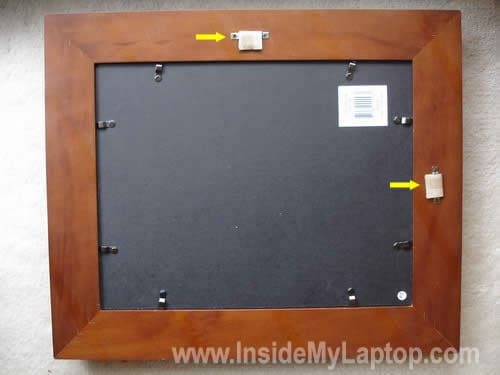 On this picture you see the back side of my frame. I removed both original wall mounting brackets and later I’ll replace them with more reliable brackets.
The LCD screen will be mounted under the black cover. In my case, I opened 8 locks and removed the cover. 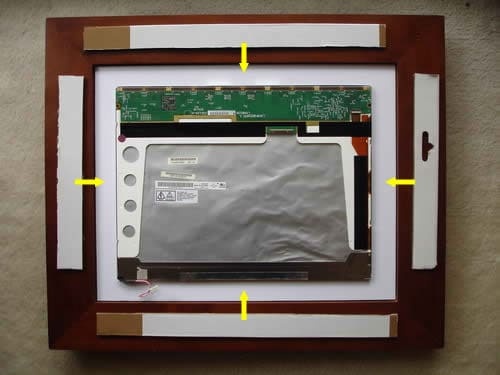 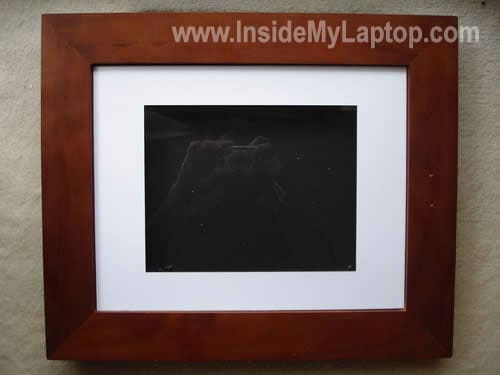 As you see, the inner paper frame is not big enough for my 14″ LCD. 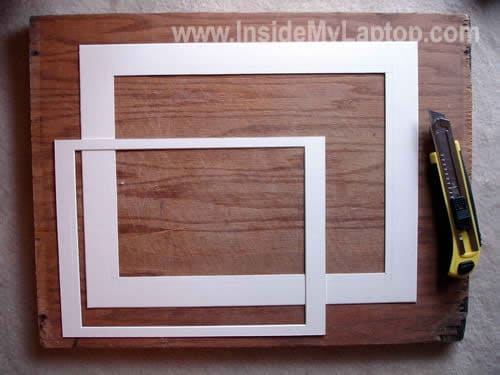 I had to remove the inner paper frame and resize the internal part of the frame to fit better. 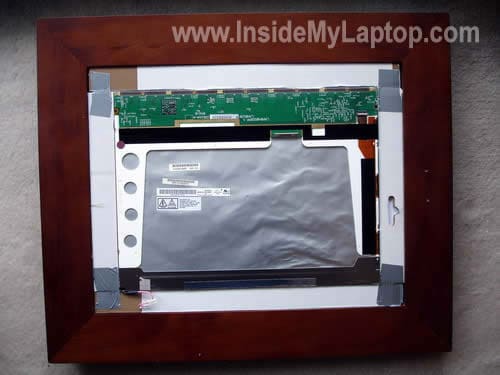 After that I installed the inner frame back in place, placed the LCD inside the frame, installed four cardboard pieces and secured them with duct tape. 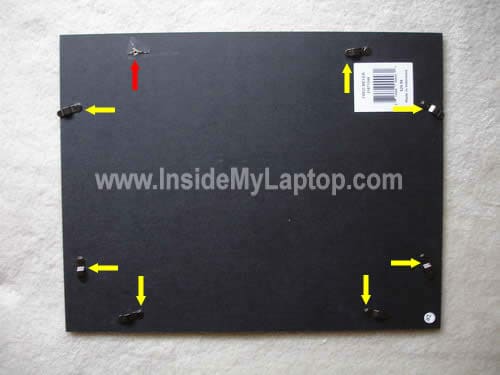 This black cover will be placed above the screen and will separate it from the laptop. Before I placed the cover in the frame, I had to remove 8 locks. 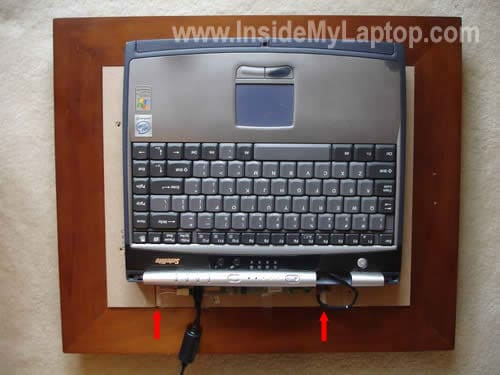 The laptop had been placed on the top of the cover. I had to cut off two openings in the cover, so I can run the video cable. 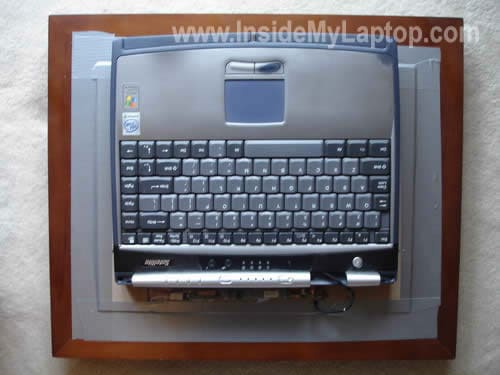 I secured the cover to the frame with duct tape. Now the screen is sealed pretty good and duct tape will prevent dust from getting inside. 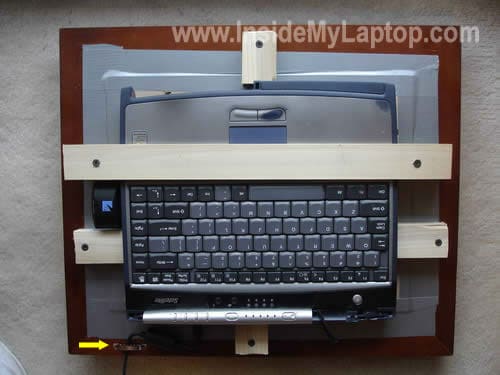 Finally, I secured the laptop base to the frame with a few wooden bars. Doesn’t look very sexy? Who cares! You’ll never see the back side of my frame when it’s placed on the wall. I also secured the power cable to the frame. 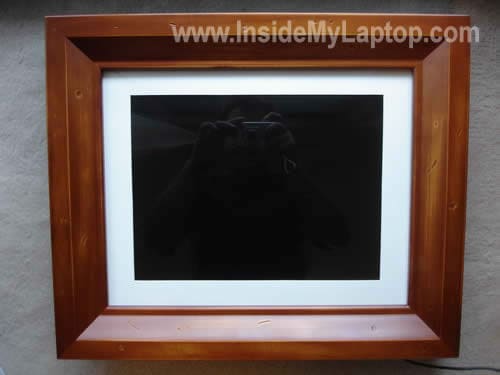 My digital picture-photo frame is almost done. Now I’ll have to attach the wall mounting brackets. 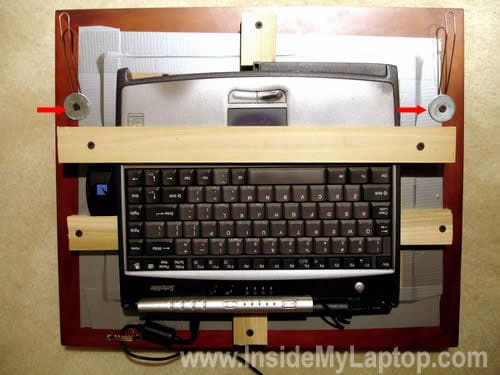 I made two brackets from a 2mm wire. Should be strong enough to keep my frame on the wall. 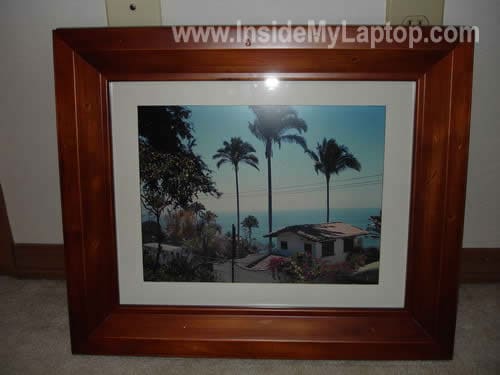 Before I placed my brand new photo frame on the wall, I uploaded all my pictures to the hard drive via wireless connection. I installed Google Picasa software (free) and set the screen saver to start playing all my pictures after 1 minute.
Now, when I press on the power button, the laptop loads Windows and after one minute the screen saver kicks in.