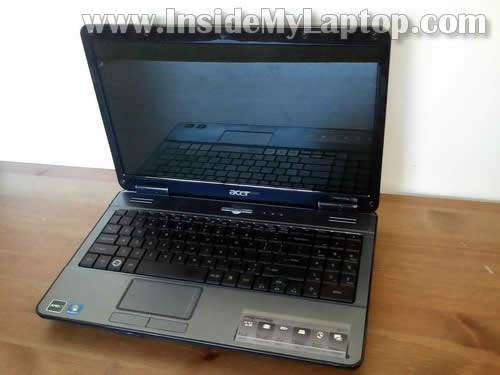 In this guide I’ll be taking apart an Acer Aspire 5517 laptop.

Most likely this guide will work for some other Acer Aspire models.

Both memory modules and hard drive can be easily accessed thought covers on the bottom of the laptop.

Remove screws and remove both covers. 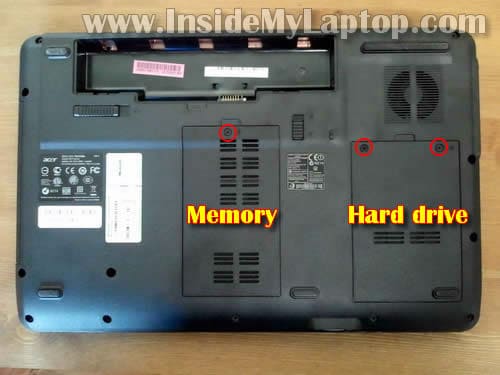 In order to disconnect the hard drive from the motherboard, slide it to the shown direction.

After that lift up and remove the hard drive. 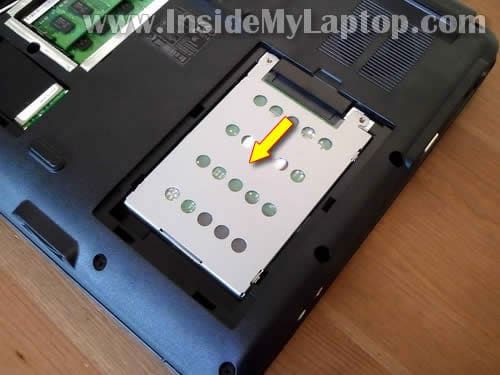 If you are replacing the hard drive, you’ll have to transfer the mounting caddy to the new one.

Simply remove four screws securing the caddy (two screws on each side) and transfer the caddy to the new HDD.

Any large capacity 2.5″ SATA HDD should work fine in this laptop. 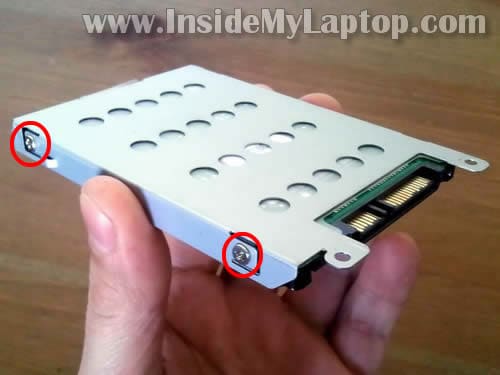 Both memory modules accessible though the cover on the bottom.

Acer Aspire 5517 can handle up to 4GB memory total. It means you can install up to 2GB memory module in each slot. 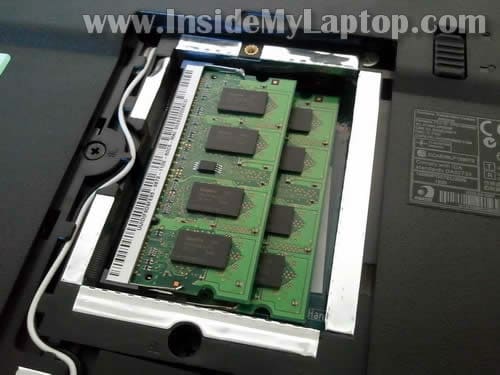 There is only one screw securing the DVD drive. This screw located under the memory cover.

Remove one screw securing the DVD drive and pull it out. 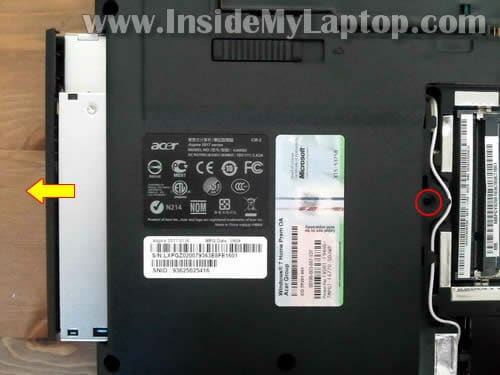 The wireless card also located under the memory cover. 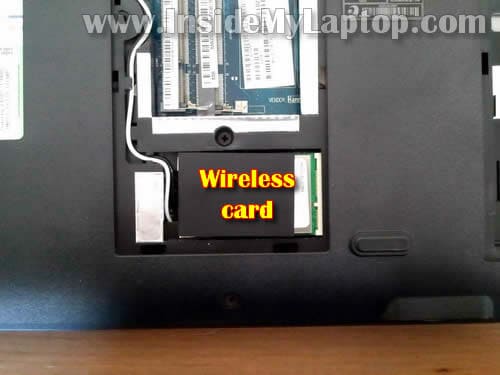 In order to remove the wireless card you’ll have to disconnect the antenna cables first.

REMOVING AND REPLACING THE KEYBOARD.

If you would like to remove and replace the keyboard, you don’t have to go though all previous steps. You can start right from here. There are no screws securing the keyboard at all.

Carefully lift up the power button cover with a sharp object as it shown on the following picture. 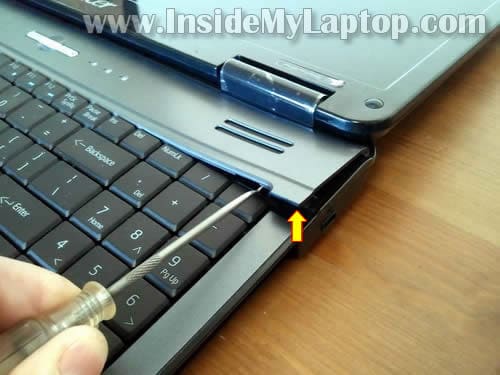 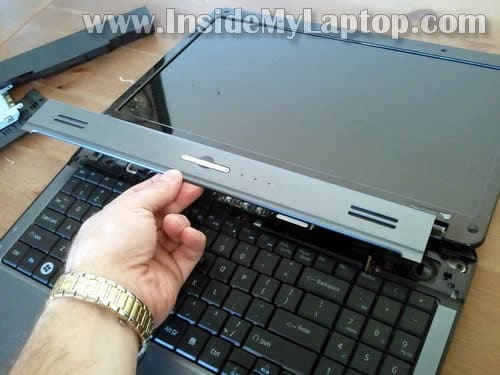 Now you can start removing the keyboard.

Work slowly. There is a cable connected to the motherboard. 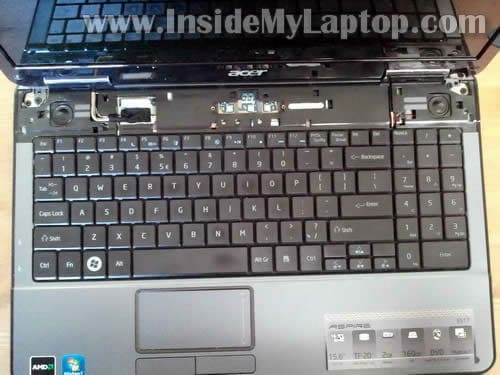 Carefully lift up the top side of the keyboard. 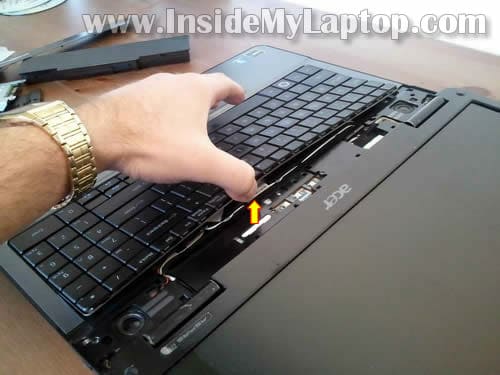 Continue removing it from the top cover. 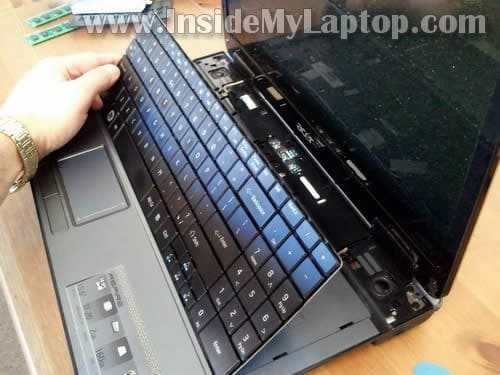 Turn the keyboard upside down so you can access the cable connector.

In order to remove the cable, you’ll have to unlock the connector first.

BE VERY CAREFUL with the connector. If you break it, the keyboard will not work. 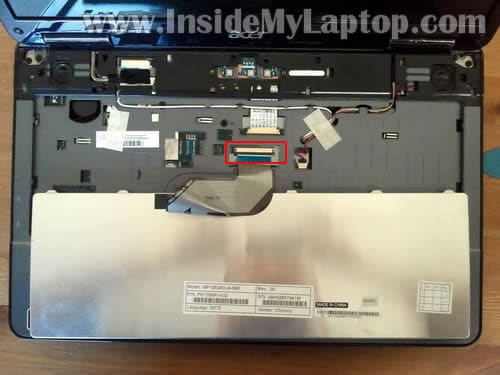 To unlock the connector, you’ll have to move the brown piece about 1-2 millimeters to the shown direction.

The brown piece MUST stay attached to the white base. Do not apply to much force. Unlock the connector very slowly with your fingernails. 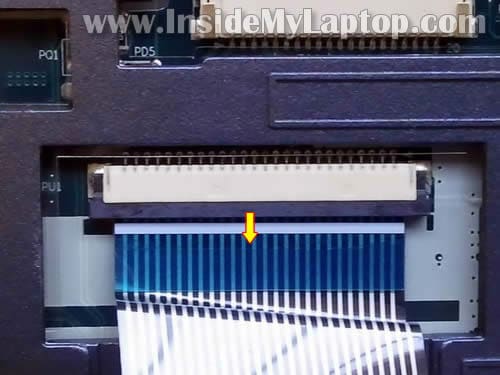 You see, the brown piece still attached to the white base. 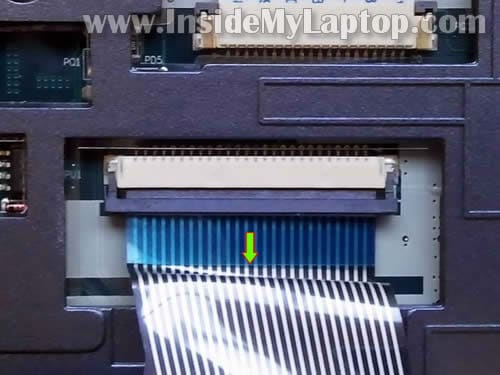 Finally, remove the keyboard and replace it with a new one. 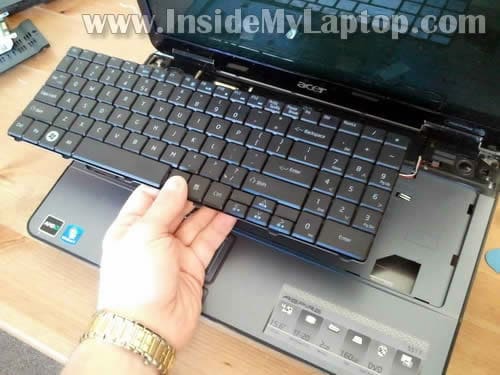