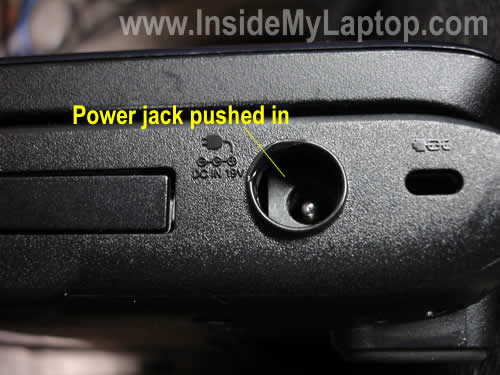 Today I explain how to repair damaged power connector also known as power jack in Toshiba Satellite L305 and L355 laptops. I started covering this problem in one of the previous posts.

PROBLEM DESCRIPTION. The power jack gets pushed into the case and gets loose.

I will replace the original plastic jack with a generic metal jack purchased at RadioShack for about $3.
The RadioShack part number is 274-1576. This jack is designed for tip size 5.5mm O.D.x2.5mm I.D. You can order this jack online or pick it up in a local store.

Proceed on your own risk! If you do something wrong, you can damage the computer. 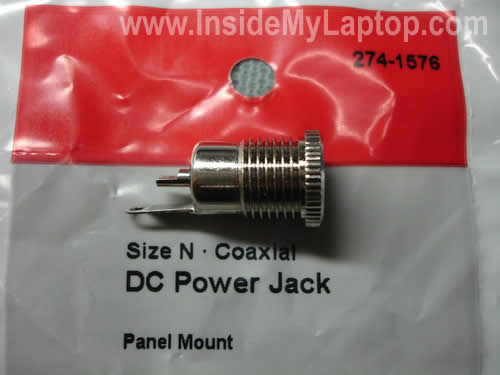 In order to access and repair the jack it’s necessary to disassemble the laptop and remove the top cover assembly. You can use IrisVista disassembly guides for Toshibas (search on google).

Disassembly steps for all above mentioned models will be very similar.

OK, let’s say the top cover is removed and we are inside.  In this particular example I use Satellite L305D.

Why the power jack feels loose? You can see that the picture below.

In my case both, the DC jack and mounting brackets on the base assembly got broken. Even if you replace the broken jack with a new one, it will not stay attached to the base.

If you send your laptop with a damage like that to a repair shop, they will recommend replacing the jack harness and base assembly. This repair will easily cost over $200 but I have a better idea how to fix it for $3. 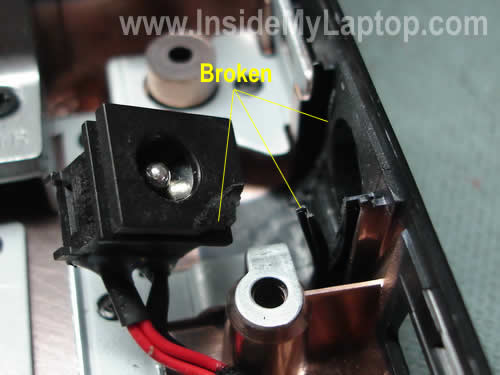 Here’s my new replacement panel-mount jack which should last for a long time unlike the original Toshiba jack. 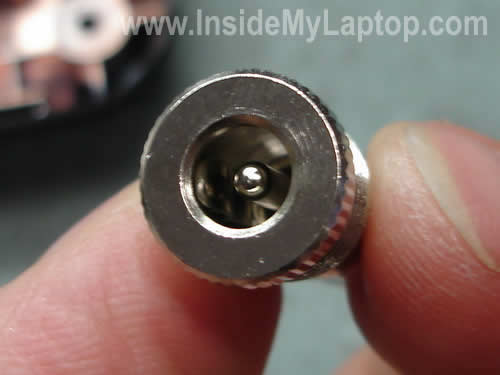 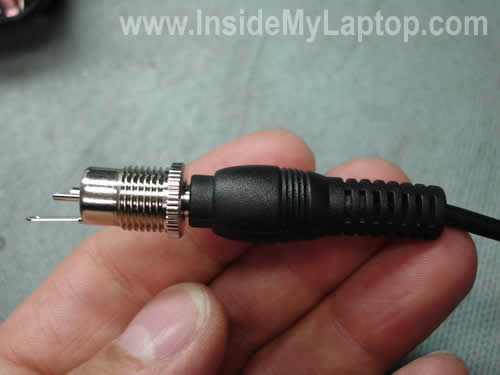 Using a pocket knife remove plastic supports from the internal side of the base assembly, so the side where the new jack will be mounted is flat. 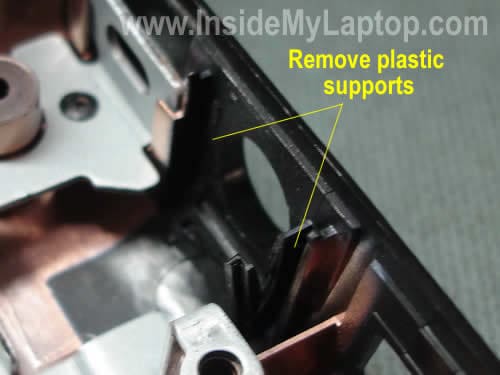 On the picture below you see plastic supports removed. 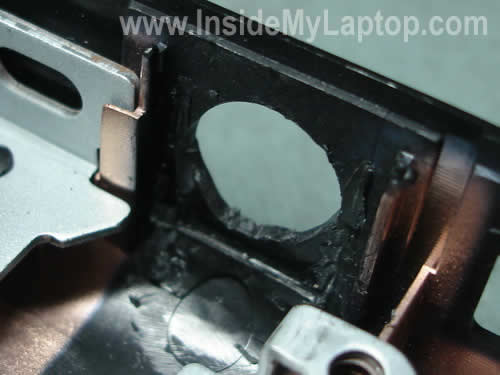 Make the hole larger, so then new jack fits in. 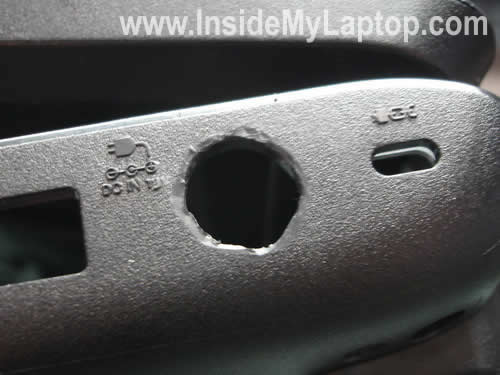 The new jack is too long and if you install it as is, the top cover will not sit properly on the base. It happens because one of the speakers (in Satellite L305D) is located very close to the DC jack.

It will work if you make the jack shorter. You can cut off part of the long “-” lead or simply bent it as I did. After it’s done coat both leads with generous amount of solder. 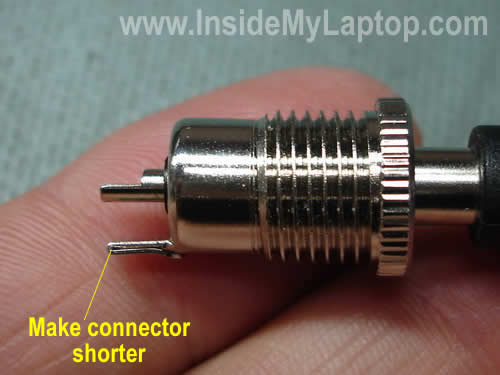 Remove the damaged DC jack from the case and cut off wires somewhere close to the jack base. 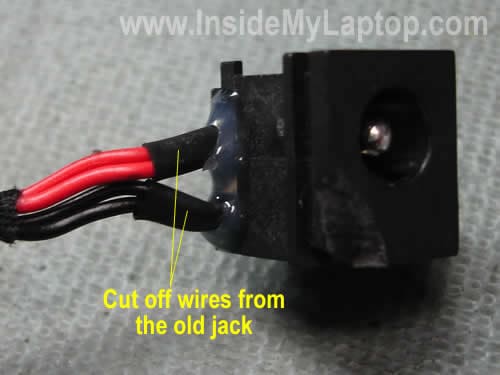 Remove insulation, twist wires and coat them with solder.

In some Toshibas you’ll find green wires instead or red wires. They also should be soldered to the “+” lead in the center of your new jack.

WARNING! Check the polarity before you apply power. 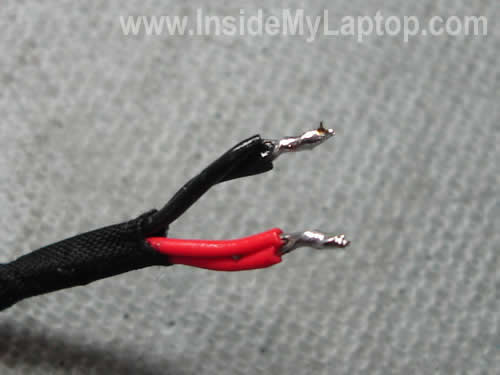 Now mount the new metal jack on the base. 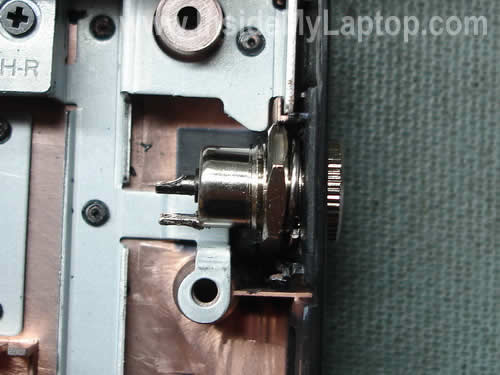 Solder wires to the new jack. Again, the red wire is soldered to the lead in the center and the black on to the lead on the side. 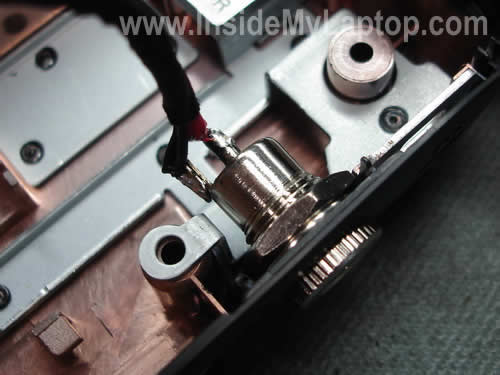 As you see, I soldered wires at a 90 degree angle to the jack so the top cover (and the right speaker) fits in.

I covered both leads with electrical tape. 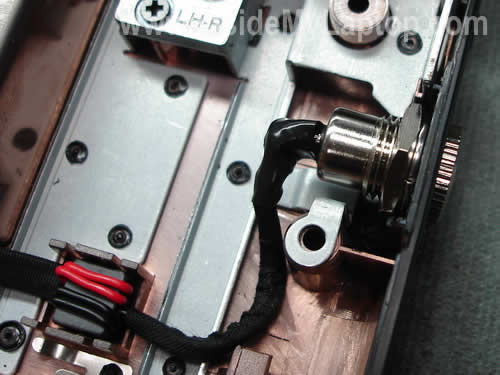 The new (modified) power harness has been installed into the base.

Tighten the nut on the jack and secure it on the base. 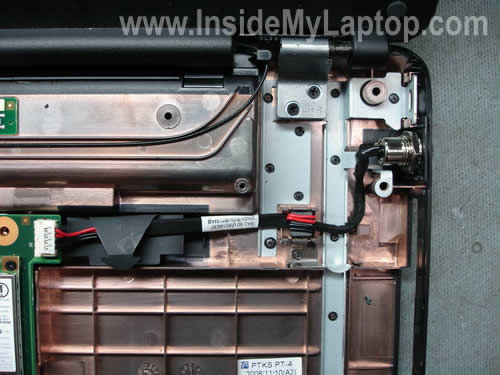 You’ll have to modify the top cover assembly a little bit so it fits on the laptop.

Remove plastic reinforcement walls so they do not touch the power jack when the cover is installed.

If you leave these walls, there will be a gap between the cover and base. 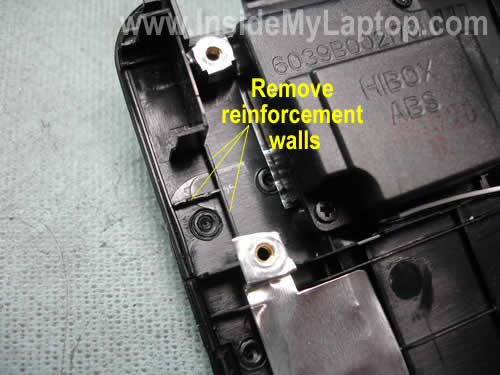 The plastic walls have been removed. 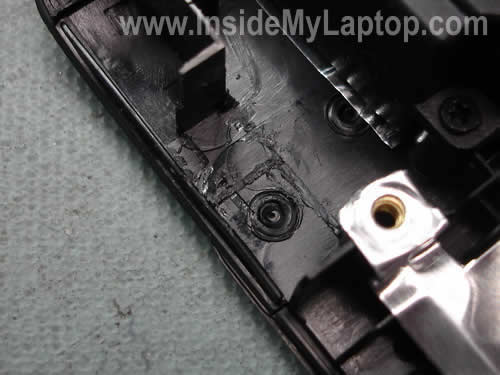 Assemble the laptop. You are done!

I think the new power jack is way more robust then the original one and should last for a long time. 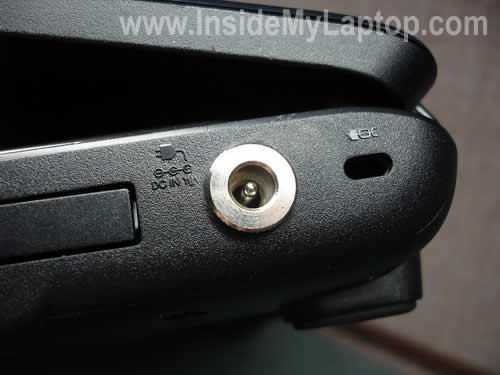 And it looks great too. 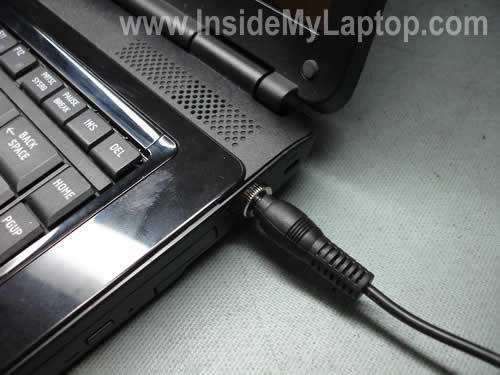 Here’s an example of damaged DC jack in a Satellite L355D.

This base is bigger than one in my previous example and you’ll have plenty of space for your modification. 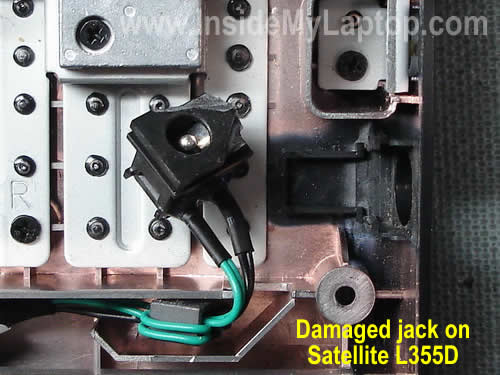 Here’s another example of damaged base assembly in a Satellite P305D.

Again, there is plenty of space for the jack modification. 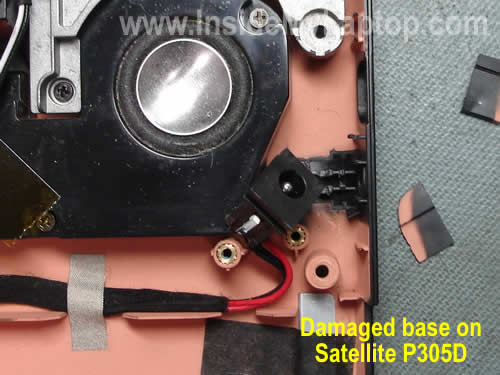 If this modification works for you, please mention the laptop model in the comments.

You are welcome to post any suggestions and improvements.

For disassembly instructions search for IrisVista on google.

This repair also worked on the following models (mentioned in comments):